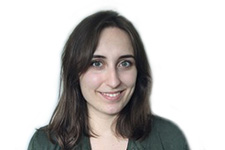 With antimicrobial resistance among the top ten global health crises, scientists focus almost exclusively on ways to combat bacteria from flourishing. Yet, bacteria hold the potential to advance technologies in different sectors such as chemical waste remediation, energy production, recycling, and pharmaceutical production. My research topic addresses new ways to understand and exploit bacterial responses to mechanical forces and substrate properties under flow conditions. The potential outlook is to examine how depletion forces drive bacteria capture from a polymer-containing solution on an antifouling hydrogel films, and subsequent bacterial response to forces while at the interface. On surfaces and in solution, bacterial cells produce an extracellular polymeric substance (EPS), a composed of polysaccharides, proteins, nucleic acids, and phospholipids potentially capable of producing depletion forces. Suspended bacteria also exhibit Brownian motion, and so would be expected to exhibit many of the related behaviors seen with colloidal particles such as adhesion and phase transitions.  PEG hydrogels are bioinert, swollen gels with tailorable properties, such as stiffness through changing polymer chain molecular weight. Also amenable to control are the bacteria themselves, since the cell wall can be engineered for different thicknesses and stiffnesses. The goal of this project is to use varying PEG hydrogel composition to minimize chemically-driven E. coli adhesion and then to exploit these non-adhesive gels to image and study the impact of depletion forces on the cells in a polymer-solvent solution and at interfaces.  This will lead to an understanding of how bacteria sense and respond to interfacial forces and mechanical stimuli, so that surfaces can be designed to control cell behavior, while remaining uncoupled from chemical signaling. This project is an interdisciplinary collaboration with the Siegrist and Tuominen labs who possess expertise in microbiology and specifically the cell envelope and the response via bacterial appendages, respectively. Through the combined efforts of the labs, we hope to identify new behaviors and mechanisms that can be exploited for novel applications, such as bacteria-deformation-based mechano-sensors, as well as aquatic bacterial electrical circuits. 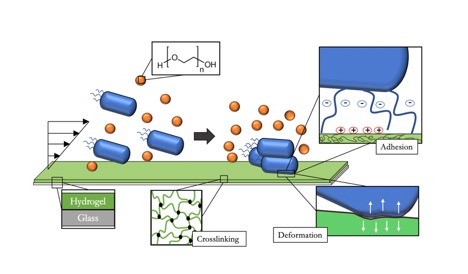